So I have been working heavily with the Microsoft Hololens over the last few months, and it has made me think quite deeply on whether or not this type of augmented workflow will eventually replace traditional monitors.

Your first thought I am sure is, don't be ridiculous, AR headsets will never be mass adopted to that degree. At first glance I would tend to agree with that, however AR as a medium has become far more accepted by the general public than VR headsets. AR as a platform has seen some great successes with apps such as the ever exampled Pokemon Go, or Snapchat. But whilst these are good examples of basic augmented reality, they are by no means its destined use.

Augmented Reality through the eyes of a proper head-mounted display (HMD)- such as the Hololens or Meta - allow for infinite desktop screen space in theory, letting the user to sprawl screens across their home or work space as they please. AR HMDs also have the distinct advantage of still allowing users to see the real world around them, which is one of the biggest factors for the many people apprehensive about trying VR currently.

AR also allows users to interact in new ways with their computers, not only by ditching the confines of the plasma rectangle, but with the use of hand tracking and gestures. This can reduce or, in future, eliminate the need for physical inputs such as mice or keyboards. These headsets should be linked to a computer rather than stand alone, but remain untethered which keeps the freedom of movement there. Thus users have the best of both worlds: power of a full PC, with the saving in physical space for hardware and finally the increased virtual desktop space.

This all sounds good but I will be the first to admit that there are currently some  limiting factors that will delay this adoption (which in time will hopefully be overcome). The major issue with current AR HMDs is their field of view (FOV) and image quality. The image quality is something that will be harder to overcome, as everything has a translucent appearance due to the nature of the technology, and can easily blocked by certain light conditions. The field of view is something that is currently being addressed by the next generation of AR headsets, such as the Hololens 2.0 which Microsoft has said it is developing; the FOV will be the major change being addressed.

After using these headsets for a number of months I really do feel that they could be, at the very least, a popular alternative to traditional display devices such as monitors. Given enough time, attention and development, AR headsets could take over as the primary form of viewing digital information. Ultimately it is down to human adoption to decide the fate of a technology, but I would say it would be a loss for this technology to not continue to make the impact it currently has, and even for it to become truly mainstream.

Just as AR’s older cousin virtual reality began as a medium for gamers and later expanded as a tool to support everything from medical training to simulations for building empathy and environmentally-friendly habits, AR’s relevance is poised to grow far beyond the confines of an Instagram Story or Snapchat messaging streak. Kathleen Chaykowski, Forbes 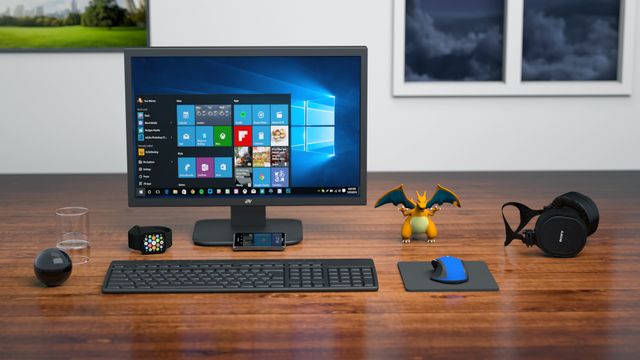 Augmented reality has the potential to impact society far beyond the use of playful selfies. Here are a few ways: https://t.co/hz70SQHqNt pic.twitter.com/H9oJR277CE

#AR’s relevance is poised to grow across industries, far beyond the confines of social media: https://t.co/i6zr5z1yIB via @Forbes @Kchaykowski

"Phones aren't going away" Eddy Cue, when asked if the future of augmented reality is wearable tech or phones